“For years wars were fought over oil,” said US Vice President Kamala Harris earlier this year. “In a short time they will be fought over water.”

Given that more than 70% of our planet is covered in water — all told that’s more than one billion trillion liters of the stuff — a short time might sound a bit dramatic. After all, there’s always been enough to go around.

But we’re talking about a finite resource. Just 3% of all that liquid mass is fresh water. And of that, most of is locked up in glaciers, leaving less than 1% accessible and usable for drinking and growing food. So as the world population increases, there is less water to go around  — and to grow the extra crops needed to feed us.

On top of that, our available water is increasingly being polluted by fertilizers and factories, or is simply being overused — causing aquifer levels in overcrowded cities to plummet. Ultimately, more of us fighting for less good water.

Throw climate change-induced extreme weather into the mix and things could get scary. While some places are flooding, others are in near permanent drought — 85% of California is currently in extreme or “exceptional” drought and towns and agricultual areas are running out of water.

As rainfall becomes more uneven and unpredictable, it’s feast or famine. While freak flooding killed more than 200 people in Germany and Belgiumthis summer, in the coming decades, stress and malnutrition linked to water scarcity in arid regions are prediction to trigger mass displacement that fuels climate conflict — especially in Africa. Kamala Harris clearly had a point.

So what’s to be done? Many will say that the solution is lapping at our shores.

Can’t we just desalt our abundance of ocean water?

We can. And in some cases, we already do, but desalination comes with its own set of issues.

First up, extracting salt from water is energy intensive, which means the process adds to the CO2 emissions that helped fuel water scarcity in the first place.

Likerain, expensive desalination plants are unevenly distributed. Of the some 20,000 installations globally, around half are located in oil-rich Gulf nations. And overall, the vast majority serve high income countries.

So in Africa, where one in three people are already dealing with extreme water insecurity, access to desalinated water is very limited — especially in poor, under-resourced countries also hit with variable rainfall and crippling drought.

The other problem is brine. Once the fresh water has been separated, the salty leftovers are returned to the ocean, where they deplete oxygen and suffocate organisms.

So where does that leave us?

Facing an uncertain future. And sometimes present — as the South African city of Cape Town knows too well. It was on the brink of running out of water in 2018, and had to resort to  cutting down hundreds of thousands of trees to help its water supply.

The underground reservoir that feeds Mexico City is also down to a trickle during droughts, while tens of millions of people in the Western US have recently been told they will have to reduce their water use next year due to low levels in the country’s largest artificial reservoir.

Meanwhile in El Paso, Texas, the city’s water utility company is installing a water purification facility that by 2028 will treat and purify sewage water and pipe it back as natural water.

Drastic times call for drastic measures. Yet recycling waste water for drinking has been happening for decades in water scarce countries like Namibia. And it’s way cheaper and more energy-efficient than desalination.

A leaked report by UN climate scientists — not due for release until 2022 — predicts that 350 million more people living in cities will suffer water scarcity from severe droughts at 1.5 degrees Celsius of warming — which the Intergovernmental Panel on Climate Change recently told us could happen next decade. Unless we start cutting our greenhouse gas emissions now, warming and related water stress will be much worse. 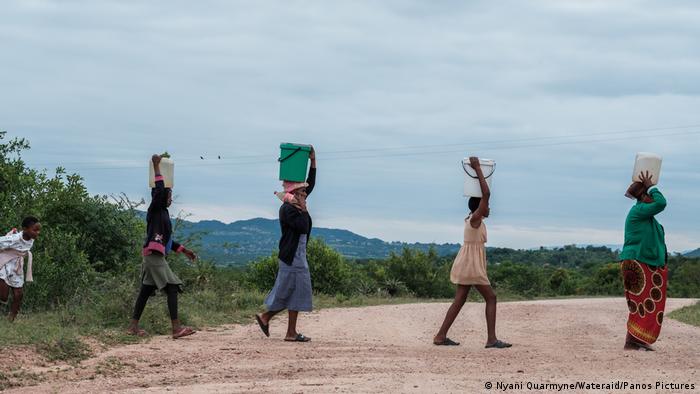 Collecting sufficient water for a household is a time-consuming process in eSwatini, Swaziland, especially as a long walk to a spring is involved

Ok, but we can adapt, right?

Sort of. But only if we make some major lifestyle changes. And it won’t be as simple as cutting down on showers and washing our clothes and cars less.

We will also have to take a long hard look at what we put into, and onto, our bodies. Like humans, some clothes and foods have a much higher water footprint than others.

Meanwhile, a kilo of vegetables like carrots and tomatoes only uses around 200 liters. Even juicy grapefruits require a relatively minor 500 liters of water per kilo. Sure, it sounds like a lot, but remember the beef.

This food water footprint will become more important as the resource gets scarcer. To reduce it, we might also need to deal with our chocolate obsession: a kilo of chocolate consumes over 17,000 liters of water, while the almonds that sometimes go into it aren’t far behind — indeed, in drought-stricken California, the thirsty nut trees are now being ripped out by farmers.

When relatively high income consumers in Europe or North America buy products that drain water from the Amazon or the central Asian Aral Sea to grow cotton for our jeans or t-shirts — they are consuming a lot of virtual water they can’t see. An abstract reality, but a reality nonetheless.

What’s the solution, live on carrots and wear hemp trousers?

It’s one way to go. But it won’t solve the problem alone.

Though according to Arjen Y. Hoekstra, the Dutch professor who invented the idea of the water footprint, cutting our meat consumption can reduce our water use by over 35%, even that is not going to be enough.

Agriculture, which uses 70% of our available fresh water and loses a lot of it to leaky pipes and evaporation, also has a role to play by ensuring efficient irrigation infrastructure.

Planting trees can also help. A study published earlier this year found that converting agricultural land to forest could boost rainfall, particularly in the summer.

But then there is the real elephant in the room; the ultimate water saving measure of climate change mitigation through rapid decarbonization.

Combined, these factors might be help save a lot of lives — and prevent those apocalyptic water wars.